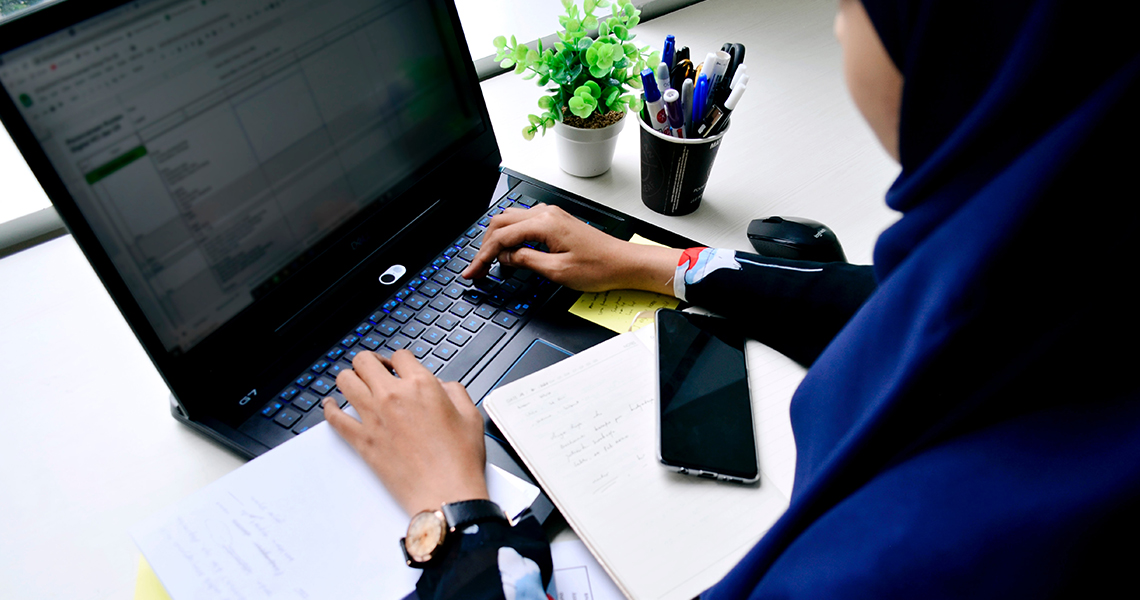 Surah An-Nisa, verse 34 “Men are the protectors/maintainers of women”, along with other similar verses have over time moulded Muslim women to be obedient wives and mothers strictly confined to the family environment while men adopt a role as the protectors and caretakers of the family.

According to renowned modernist scholar and philosopher of Islam, Fazlur Rahman, instead of adopting just the literal definition of the verse, circumstances surrounding the verse should also be examined. According to him, the verse is a description of the way things happened generally in Mecca in the 6th and 7th centuries and not a prescription for the way things should always be. It is a description of functional superiority, and not inherent superiority. Surah al-Tawbah (Qur’an, 9:71) puts women on an equal footing with men in the struggle for the cause of Islam. On this basis, Sheikh Al-Qaradawi mentions that women must work in that which they can do well at, just as men must work to strive for the same, subject to specific rules and conditions.

Unfortunately, Muslim society prefers to adopt the literal interpretation and after a while, Muslim men became more inclined to participate in labour markets than Muslim women. A similar worldview is shared in modern-day Islamic banking and finance (which is premised on the principles of Shari’ah law) where women’s active involvements are scarce, while professionals and scholars in the field continue to be predominantly male. Therefore, this article intends to briefly highlight the real effect of Islam on the status of women and especially its effect on the positive role that women can play in the development of modern-day Islamic banking and finance.

Although contemporary Muslim society prefers to restrict the role of the majority of Muslim women to be wives and mothers, the reality is that women were an integral part of the economy of historical Islam.

Considering the fact that Prophet Muhammad’s (PBUH) own wife, Khadijah was a successful and respected businesswoman, it is clear that legislation against women’s economic independence needs to be revisited. It is also heartwarming to find out that some of the transactions we use in modern-day Islamic banking and finance can be traced back to her. There were significant other female personalities that meaningfully contributed to the economy during the era of Prophet Muhammad (PBUH). However, due to the limitation of this article, only two other historical female personalities will be discussed.

Zaynab Bint Abi Mu’awiya was one of the handful of women during the time of the Prophet (PBUH) who provided zakah to her husband and other family members. Her deed was encouraged by the Prophet (PBUH). Her huge amount of wealth, one that made her richer than her husband, was her efficacious business of producing and selling of handicrafts. Umrah Bint Abdul Rahman endures as one of the great female scholars who have established hallmarks on the intellectual history of Islam, and whose status has been acknowledged by learned men. She was a lady of great knowledge, reliable in debates and was an authority on Islamic jurisprudence, especially on the narratives and traditions of her teacher, Aishah Bint Abu Bakr Al-Siddique. According to Imam Zahari, she was an unfathomed ocean of knowledge.

Despite such evidence of women’s significant status in Islam, there seems to be a huge gap in modern-day Islamic banking and finance industry towards women playing an effective role in the industry.

According to Thomson Reuter’s projections, Islamic finance assets are projected to grow to USD3.2 trillion by 2020, with Islamic banking reaching USD2.6 trillion. Even though the growing industry’s average annual growth rate of approximately 15% warrants at least 50,000 professionals globally over the next several years, there is a distinct lack of women occupying the positions of CEOs and Shariah advisors.

Nevertheless, with changing times and wider exposure to proper education, the landscape is positively changing. In the past, Islamic finance and women formed an improbable combination, but now women are becoming more dynamically engaged within the industry.

In key Islamic finance jurisdictions such as Malaysia, women have arguably made the greatest inroads in Islamic finance. The ruling that a Shariah scholar can sit on the Shariah board of only one bank (but permits another concurrent non-bank entity) has created an influx of fresh faces into the industry. This has created brighter prospects for women to be trained and engaged as Shariah scholars in the banking industry because eventually, necessity will undermine gender prejudices.

Apart from these common names, another young and upcoming female Shariah personality is Dr.Marjan Muhammad. Under her leadership as Director of Research for ISRA from the year 2013-2017, ISRA won the “Best Islamic Research Firm” award for four consecutive years. Under her leadership, ISRA also won the “Most Outstanding Islamic Finance Research House” and “Islamic Economy Knowledge Infrastructure Award”. Malaysia is also home to one of the most qualified Islamic finance lawyers in the world, Dr Aida Othman, the director of Malaysia’s Zico Shariah Advisory Services.

Several prominent females in Islamic finance can also be found in both Germany and the United Kingdom (UK). In Germany, one can find the exceptional academic and Shariah scholar Shaykha Halima Krausen and in the UK, one can come across a leading specialist in Islamic finance, Stella Cox. Moving to other key Islamic finance jurisdictions such as the GCC, while there are a few prominent women sitting on company boards and working as CEOs in Bahrain and Kuwait, they are notable exceptions.

But data shows that some exciting changes are happening. For example, in 2015, Abu Dhabi Islamic Bank (ADIB) pioneered changes in the GCC towards encouraging women to enter into the industry. It announced the launch of the Tamkeen Women in Leadership Program, a leadership training program dedicated to female bankers. The aim of the program is to encourage more women to progress to senior leadership roles within the bank by further developing the skills needed for senior management levels. A year later, 28 female candidates graduated from the Tamkeen Women in Leadership Program.

Recognition of Effort and Hard Work of Women in Islamic Finance

WOMANi100 proudly acknowledges the top 100 women who are part of a new generation of icons, game changers and driving change across the Islamic financial services industry. Their achievements are not by virtue of their family backgrounds, marital relationships or other default positions; but rather because of their sheer hard work, relentless efforts to pursue professional careers, and commitment to the cause of IBF.

It is notable to highlight that the top 10 winners are women from various parts of the world (2 from the United Kingdom, 5 from Malaysia, 1 from Indonesia, 1 from Pakistan and 1 from Nigeria), further highlighting the international standing of Islamic banking and finance.

Complementary Role of Women in Modern-Day Islamic Banking and Finance

With the growing numbers of women serving the Islamic banking and finance industry, it could be said to act as an impetus towards the overall progress of the industry.

As highlighted by Dr Engku Rabiah Adawiyah Engku Ali, women tend to be more committed and loyal to the entity that they serve. Their commitments are mostly driven by their affection for knowledge, experience and recognition; and not for monetary motives. Additionally, Islamic finance female scholars are more likely to adhere to principles of Shariah due to greater attention to detail, carefulness and effectiveness; and they are less predisposed to engage in excessive risk-taking and speculative behaviour in sale and purchase activities.

Since women have more nerve cells that control both evaluation and planning in their brains, they are more inclined to make detailed plans for the near future (six months). This foresight that women are more likely to have can be beneficial during the development of Islamic finance products and Shariah approval of products as they are able to anticipate whether product development and its corresponding Shariah approval will aid or impede the growth of the Islamic finance industry.

Apart from the above, women are increasingly controlling large amounts of wealth across the world. Similar to how women may often prefer a female doctor etc., they might also feel more at ease in discussing financial matters with another woman.

Therefore, by having more women working in the Islamic banking and finance industry, this will eventually pool more investments and assets into the industry.

Despite the long bumpy rides, women have made their presence felt in a formidable manner as highlighted in the article. Women in Islamic banking and finance bring in complementary aspects into the industry. As women are controlling an augmenting and significant amount of private wealth capital, more women working in the Islamic banking and finance industry could certainly attract more female customers, as that is where the synergy lies. Finally, Islamic banks can answer this call by providing better economic opportunities for women to succeed – opportunities that will facilitate the contribution of women to the overall economic progress of society.