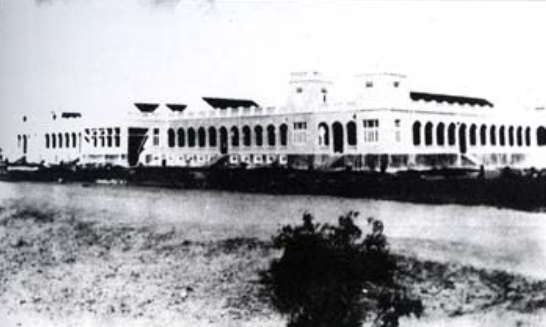 At Wahed, we find great inspiration in the examples of our investors, their stories, their principles, and their contributions to humanity. They remind us of the values and ethics our business is based on and the social impact we wish to leave. Here is just one inspiring example from our esteemed investors…

The history of The House of Adamjee is a saga in its own right, spanning 4 South Asian countries and dating back roughly 140 years. It began with the dynasty’s patriarch, Sir Adamjee Haji Dawood. Haji Dawood was born in 1880 to a Memon household in Jetpur, Gujrat, during the British occupation of India.

Rags to Riches in Rangoon

Haji Dawood showed promising business acumen and a strong work ethic from a young age, despite his limited schooling experience. In the 1890s, his drive for self-determination brought him to Burma, where he spent several years as a matchbook maker. He used this time to develop his business reporter and build the resources needed to see his own industrial vision through to fruition.

His dreams were realised by establishing history in Yangon [formerly Rangoon]. Between 1922 and 1927, Haji Dawood’s business saw immense success. However, it was a short-lived venture. Towards the end of the decade, the complex was seized and nationalised by the Burmese government. Whilst many might have buckled in the face of such obstacles, Haji Dawood saw an opportunity and refused to throw in the towel. He returned to India and set up another factory, a jute mill in Calcutta.

Textiles was one of India’s most ancient and famous industries, with Indian fabrics being the muse of Roman and Persian royalty in the days of antiquity. It was also one of the many commercial sectors which the colonial force of the British East India Company had forcibly monopolised. The Adamjee Jute Mill LTD. was among the first major indigenous competitors to this monopoly and was the first Muslim public company.

Haji Dawood would find his assets seized and nationalised once again following the Indian Partition of 1947. Like the previous occasion, this setback did little to hamper Adamjee’s spirit; in fact, it only bolstered his ingenuity and ambition as he moved to East Pakistan [modern day Bangladesh] and established what was then the largest Jute Mill in the world.

At that time, the Bengal province constituted over 40% of the world’s jute crop, which Haji Dawood made great use of. His factory employed roughly 25,000 workers, with 3,000 operating looms. An onsite housing complex was built specifically for the workers at the factory. Though the group would have numerous other operations in the province, the Jute Mill was its flagship enterprise, exporting its products to more than 50 countries.

Sir Adamjee was not simply a commercially minded man but a socially conscious one as well. He placed a great emphasis on education and contributed to establishing numerous institutes of learning across the subcontinent. Beyond his Philanthropy, he was also a close friend of Muhammad Ali Jinnah, the eventual founder of Pakistan. Jinnah often sought council with Haji Dawood, who would play a significant role within the Muslim League, being one of its primary advisors and financial backers.

Adamjee would continue his community service in the fledgling nation which he now called home. Amidst the turbulence and disorder brought about by the mass migration and displacement, Haji Dawood played a crucial role in mobilising the Memom community towards migration and was responsible for establishing vital institutions such as Pakistan’s State Bank, which was founded upon Adamjee’s advice to Jinnah. Before the independence movement, he also helped lay the foundations for Orient Airways alongside M.A. Ispahani. Orient Airways would later become Pakistan’s flag-bearing airline PIA (Pakistan International Airlines).

Ode to an Icon

Haji Dawood passed away in January of 1948 in the city of Karachi. His demise was described by Jinnah himself as a national loss. Despite Haji Dawood having only witnessed the earliest days of Pakistan, his legacy was already cemented, and his absence was felt across the nation. Sir Haji Dawood was succeeded by his son, Abdul Wahid Adamjee, who not only took on his father’s entrepreneurial and philanthropic mantle but carried that same dualistic spirit to new heights. Under Abdul Wahid, the Adamjee group expanded beyond the subcontinent into Malaysia, Lebanon and even the UK. For a time, the conglomerate encompassed more than 40 operations across finance and its root trade of consumer goods (textiles, tea etc.). However, as experienced by his father, this success would not come without adversity, specifically in another wave of governmental acquisition. The famed Jute Mill and all of the family’s other assets in East Pakistan were seized by the newly founded government of Bangladesh following secession in the early 1970s. In that same decade, the Bhutto administration’s own nationalising program led to the group losing a sizable portion of its assets in West Pakistan.

In response to these losses, the group resolved to diversify further, branching out into other industries such as petroleum, polymers, engineering and investment, to name but a few. Today the House of Adamjee remains among some of Pakistan’s richest families and is arguably most historic. They maintain one of the largest charitable foundations in the country, which funds various institutes of education and healthcare centres. Simultaneously, their business expands and develops, rising to new challenges and venturing into new and emerging industries.

We here at Wahed are privileged in having such an iconic investor. The story of this house is one of the epic proportions, with inspiring examples of resilience, ingenuity and compassion for the community, all of which are qualities we hope to embody in our business.