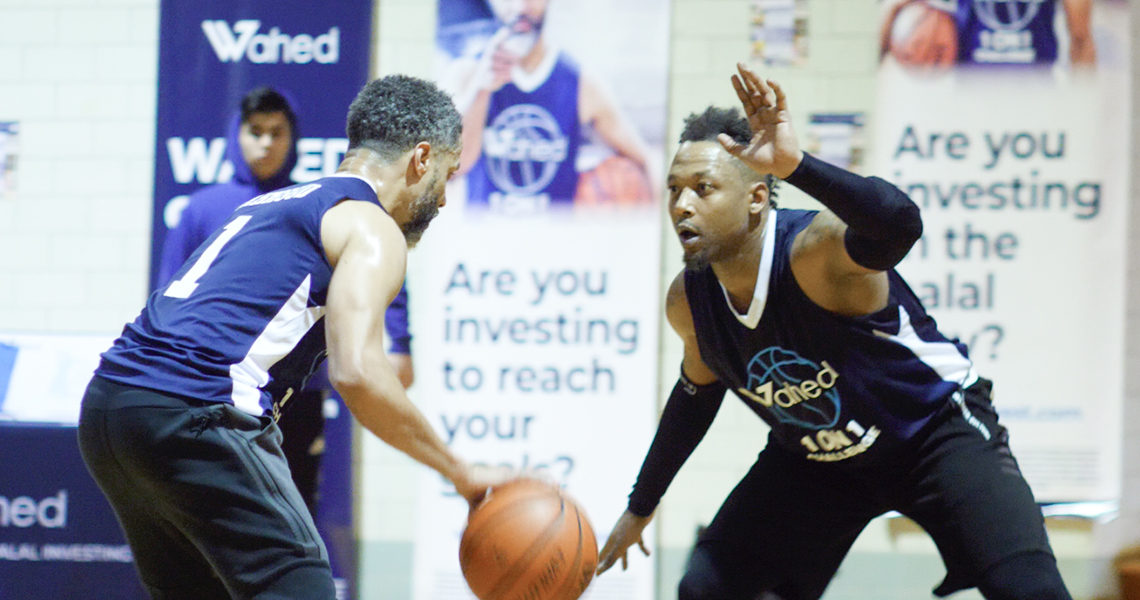 New York, USA, March 18, 2019 – A packed audience on a Friday evening at MDQ Academy Gym was treated to an exciting end of the Wahed 1on1 Challenge with Mahmoud on March 15, 2019. Eight top players drawn from 64 in the NY Qualifying round were locked in a battle for the number one spot to challenge NBA and BIG3 superstar Mahmoud Abdul Rauf 1on1. The winner takes home $1000 and $2000 for their community.

The exciting event, however, started with a somber prayer for the victims of terrorist attacks in New Zealand lead by Mufti Muhammad Farhan, scholar and Executive Director of the Islamic Center of Long Island.

The winner among the eight finalists was Marcus Robinson from Pennsylvania. He showed a high level of basketball skills, strength, and stamina, after putting away his competitors in three tough 1on1 rounds. He then had to face off with Mahmoud 1on1. It was the featured match-up that the audience was anxiously awaiting. In the end, Mahmoud triumphed in a very close and tight game. Marcus was honored and was grateful to Wahed for the opportunity of playing such a wise and fierce competitor.

Mahmoud was impressed and admired the efforts and the high skills of his opponent; he has offered to give Marcus half of what he would have won if he was able to beat him.

In an exciting twist of events, MDQ challenged attendees to shoot from half-court, and if they were successful, they would win a signed basketball from Mahmoud. Mufti Farhan stepped up to the challenge and was able to sink it in his second attempt, all net! The audience of students, teachers, administrators, parents and community leaders were all on their feet jumping and celebrating.

Wahed extends gratitude to the Muslim communities on Long Island, NY for their support and collaboration in making this event a success. Mahmoud was welcomed to MDQ Academy very warmly; he was given a tour of the school and its classes by the Principal and senior teachers. He met with students from all grades and signed their posters and banners. As the NY Finals wrapped up with tears and applause, both the Muslim community in the area and Wahed team expressed their excitement and enthusiasm for another competition shortly.

Special thanks to all the contestants, Ammad Shaikh from South Asian Sports Network, Mufti Mohammed Farhan, Management and Staff of ICLI, the Principal, Teachers and Students of MDQ Academy, Hanif Khaleel from Crescent Sports and many others who made this event such a success.