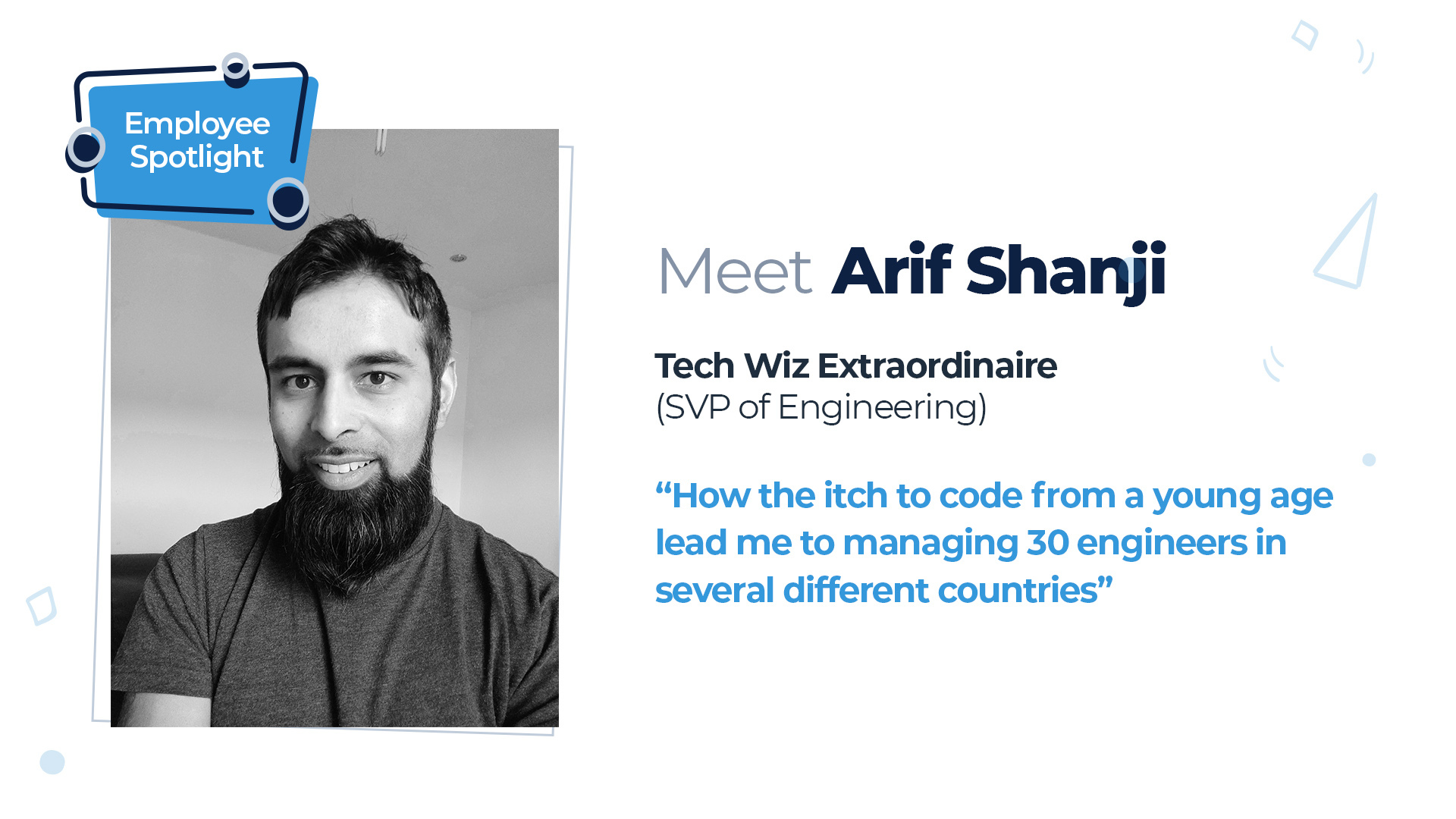 We recently sat down with our new SVP of Engineering at Wahed, Arif Shanji. He talked to us about his experience and career so far, how he’s enjoying his current role, the challenge to take Wahed global and his vision for the future.

How did you get into software engineering and what’s your background?

I got the itch to code early on; I remember my father and I used to program together when I was young and that inspired me to enter the world of technology. I eventually ended up at King’s College, London and studied computer science. I had a part-time job during my degree that turned into a full-time role once I’d graduated -and I have continued to work non stop!

My career began at a fintech start-up, where I was a developer for about seven years. In my last two years there, the company was acquired by CMC Markets.

Proudest moment? (Laughing modestly) Probably when I was part of a team that created a Market Map tool, a tool to visualise financial data, which was featured on big banks and stockbroking sites – Barclays, Santander, HSBC, E*TRADE and 100s of others. It wasn’t just mine though! We created it together and most of the big investing sites used some or all of the investor tools that we created at this small fintech company.

After that I joined Yahoo, which was a fantastic company to work for. I started initially as a backend developer managing over 600 different feeds for aggregated news for the European site. I also moved to the sports team, where we won awards for our World Cup website. I was there for a total of six years and got my first taste of management experience there.

I then moved into my first head of engineering roles – one position was at a start-up called Kano, and I was also director of engineering for Perkbox for two and a half years.

All of which leads us to a LinkedIn email from Wahed, that really came out of nowhere! It got me thinking about my life going forward – joining a company from a moral and ethical point of view. Wahed really reflected my own values and it gives people the opportunity to invest in a more transparent and responsible way and not just from an Islamic point of view – it’s disrupting the industry with good faith.

Tell us about your role at Wahed?

I really enjoy working here – I work in London, remotely for now, and oversee 30 engineers based in Dubai, India, UK and Malaysia.

This year alone we’ve hired nine engineers, and plan to hire another five, with the ultimate goal being to grow the team to 100.

About 20% of our coding team are female, which is great. It’s super important to have a diverse team because different experiences, backgrounds and educational paths taken adds to the value of the entire team. You get different viewpoints which can be really valuable. Having a less diverse team means you have fewer new ideas.

And it’s not just about diversity through a gender-lens. We have engineers from the Netherlands, Poland, England, Scotland, Jordan, India, Pakistan, Somalia, Malaysia, Kyrgyzstan and Russia! While Wahed is geared towards an Islamic userbase, the tech team actually has a Muslim minority – we have a lot more engineers from different backgrounds and all over the world, which brings the best out of team.

Other than managing engineers, hiring and setting up a new agile-based tech team structure, in my role as SVP of engineering, I look after many things – the tech strategy, working with the CPO and planning upcoming projects, providing technical guidance to the Leadership team, looking at ways of improving processes and getting them in place, striving to get the team to tech excellence and when I can, rolling up my sleeves and getting hands-on with some coding. At the end of a busy day of video calls, I have to scratch that programming itch!

What talent are you looking for to grow your team?

10 years ago, there was a bias towards recruiting students with a computer science background. But I think in the current market we see a lot of bootcamps that offer fast-track learning. From experience, I’ve hired some really talented people from bootcamps, because it shows how passionate a person is. You have people switching their careers to become coders, learning a huge amount in intense courses of twelve to sixteen weeks, who come from different backgrounds – like lawyers and administrative staff becoming programmers!

I don’t think it’s necessary any more to go down a traditional route. I think as interviewers, we’re looking for practical and varied experience. Has the candidate gone beyond what they started off doing? Have they progressed in their career and how fast? It’s not just about what they hold in degrees, but more what they’ve done in different projects and how they have coped in different scenarios.

What are you most excited about in your current role?

At Wahed, we’re making the transformational shift from a financial investments company to a one stop shop for ethically driven products and services which is thrilling – and it’s a privilege to be making this happen.

Last year we bought the UK’s first Islamic digital bank and we are currently in the middle of consolidating their stack into ours. We’ll be able to offer a unique, interest-free debit card facility complimenting our core digital investment product. We’re also working on ethical insurance and focusing on our UK launch and US relaunch.

What are some of the challenges to development?

The biggest challenge by far is delivering on our global services – a new region brings new issues around data, compliance, and regulation.

Take our launch in Saudi Arabia, for example. Our platform is based on Amazon Web Services, which can’t be used there because of regulatory issues. So I’m happy to announce that we are one of the few companies in the world that are multi-cloud – we can operate via any cloud provider. That’s been hugely challenging (and rewarding!)

There are three things I LOVE about this job – the team, the tech, and the mission!

I love the team – and not just the tech team – everyone in the company wants to help each other. The tech we use is really cutting edge. It’s a dream-come-true tech stack to be working with. Our tech stack consists of Golang, React Native, GraphQL, Kafka and Elasticsearch. We have an event-driven microservices-based architecture, which means our systems are well-organised – organised more like a highway and less like a spaghetti junction! This enables faster development, allows us to scale much better and build secure and robust systems.

And the mission of the company resonates with me – using tech to deliver an ethical product is something that is close to my heart. And now that we have made the app live in the UK, it’s a tremendous feeling to be actually using the product that we’ve built and seeing the mission come to life!

Where do you see yourself in five years’ time?

That’s too far away to know! I’m only focused on the next two: I see myself looking after a really expanded tech team in a lot more countries, building and looking after multiple product lines and managing many more partnerships. I also would like to bring some data science into the company. I’m already taking some steps to start Wahed on the data journey.

It’s a very exciting time at Wahed, and I’ve only been here seven months! There’s nowhere else I’d rather be working.