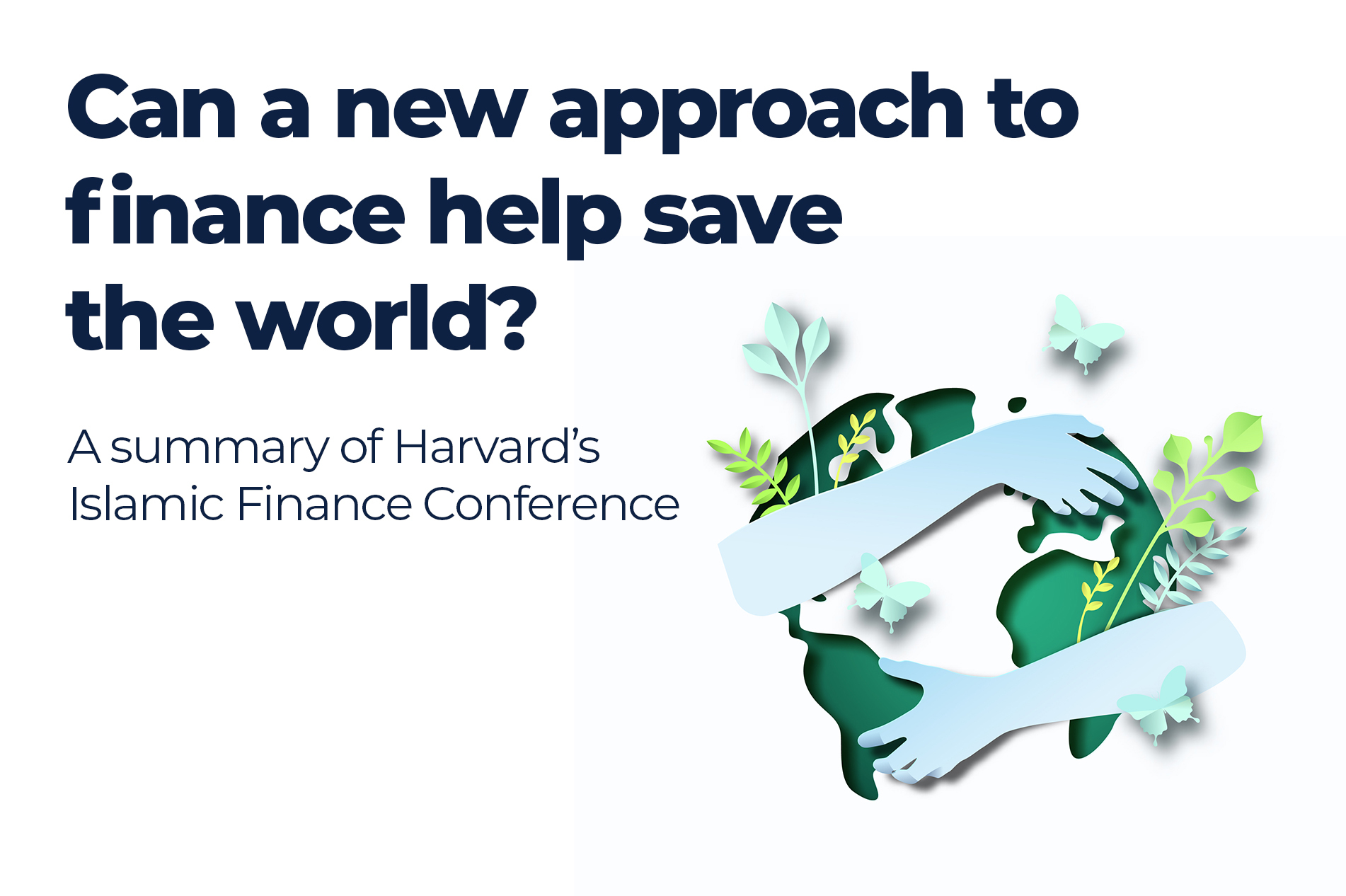 In 2015, the United Nations proposed and adopted a new agenda to meet a global vision by 2030. Dubbed the “Sustainable Development Goals” (SDGs), this initiative was a call to action to bring about change on a number of major issues afflicting the world today.

Since the proposal, 193 countries have adopted these SDGs, which are made up of 17 global goals with 169 targets. These goals cover the most serious issues facing people and the planet, from social welfare to environmental issues and economic development.

The issues that the SDGs aim to resolve are complex and multi-faceted, requiring a radically different approach to economics and finance at the institutional level. This article will analyze and suggest how the principles and ethics that underlie Islamic Finance can help solve these issues and help meet Sustainable Development Goals worldwide.

End Poverty: The current UN poverty line is demarcated at $1.90 or less in earnings per day. In the past 20 years, the percentage of the world’s workers living under this line has dropped from 28% to 10.2%. While this has been a positive trend, the poverty line has always been an incomplete indicator of the entrenched nature of poverty, and getting as much of the global population above the line is only the first step in tackling poverty and financial inequality.

Decent Work & Economic Growth: Though extreme poverty among workers has declined over the past few decades, access to work opportunities has become slimmer and the slow rate of growth in the global economy is exacerbating this problem. According to the UN’s own site, in 2015 more than 204 million people were left unemployed.

Reducing Inequality: Income inequality is significantly higher now than in recent decades. 40% of global income is received by only the wealthiest 10% of people. As the wealth gap continues to grow, low-income earners and economically marginalised demographics are feeling the brunt of these troubles.

Charity and philanthropy are sacralised in Islam in the tenets of Zakat and Sadaqah. Zakat in particular is one of the five pillars and compulsory. It can loosely be described as an‘alms-tax’ where a Muslim earning over a particular income threshold is required to give 2.5% of their wealth annually towards causes for the needy and supporting vulnerable elements of society.

According to Credit Suisse in 2015, global wealth was at $250 trillion USD. If a 2.5% wealth was applied to these savings, it would provide us with an annual budget of $6.25 trillion to alleviate poverty.

There are a number of benefits to Zakat as a model of taxation relative to conventional forms. One of the greatest benefits of this approach is that it taxes wealth rather than income. If done properly, taxing the top 10% on their net assets annually would prevent them from accumulating wealth at such a tremendous rate. This presents an opportunity to close the wealth gap from both ends – by investing the collected tax in institutions that support the financially disenfranchised and by putting checks and balances on the financial elite.

Quality education: Universal primary education is among the closest of the SDGs to becoming a reality. We live in a near-unprecedented era in terms of the spread of basic literacy and access to information, but there is still room for improvement. Over 50 million children still do not have access to primary education. Conflict, poverty, and lack of infrastructure are major hurdles to education.

Health and well-being: Humanity has made great strides in the medical field, as seen by the declining infant and maternal mortality rates, as well as deaths caused by infectious diseases such as Malaria and HIV. However, there is still a long way to go in providing general access to healthcare. The life expectancy gap between the most and least prosperous countries currently is 31 years and the Covid-19 pandemic has further brought to light the disparity in access to quality healthcare. Meeting this goal is crucial to the UN’s 2030 agenda and social development as a whole.

This is another area where Islam’s focus on almsgiving could be advantageous. We’ve spoken about Zakat already, but there are other forms of charity that can also be applied to meet these goals. For instance, a specific form of Zakat, Zakat-ul-Fitr which coincides with the festival celebrating the end of the month of Ramadan is used specifically for food donations.

Islamic financial institutions are already proving their ability to affect meaningful change in the above areas. Islamic investments naturally avoid investment in alcohol, tobacco and other products detrimental to well-being. Should such a principle be adopted by major backers of such institutions, then access to harmful products could decline significantly and in turn, health issues related to these products could decrease. In fact, some international bodies are already utilizing Islamic financial products in order to fund healthcare initiatives. The International Finance Facility for Immunization Company invests in projects for GAVI (Global Alliance for Vaccines and Immunization) through profits generated from a Sukuk– an Islamic financial certificate roughly similar to a fixed-income security.

Additionally, education has proven to be a primary area of investment in the GCC region today which stems from the religious emphasis placed upon it. Seeking knowledge is considered a duty in Islam, and so facilitating education for the masses is deemed a social imperative.

Islamic finance can offer a paradigm shift in that it is not entirely driven by profit. Not only do its principles abstain from dangerous practices such as dealing in harmful products, but the tradition incentivizes investing in the greater good of the community. These practices go beyond conventional financial solutions, but rather contribute to a culture of ethics and social consciousness through risk-sharing and an alignment of incentives.

Climate action: In the past two years alone we’ve already seen a glimpse of some of the disastrous effects of climate change on the ecosystem. Rampant wildfires, droughts and severe storms have affected vast regions from Australia to the west coast of the United States. Between 1990 and 2013, 1.6 million people died in natural disasters and the annual death toll from them is increasing year by year. We are at a critical point wherein if meaningful action is not taken, we could be witnessing the biggest threat to life in modern history.

Responsible consumption and production: High volumes of waste and mismanagement of material goods contribute to a host of different issues including pollution. This is evidently a major issue in the developed world where the demand for consumer goods and rate of consumption is much higher. Developed markets used much higher materials per unit of GDP (23.6 kg) than emerging markets (14.5 kg). Reducing the use of natural resources and toxic materials in production is crucial to the fight for sustainability.

Affordable and clean energy: Access to electricity has increased worldwide this century. In 2012, 85% were able to access electricity. Fossil fuels, however, still dominate much of daily life worldwide. Roughly 3 billion people still rely on polluting fuels for basic tasks such as cooking, and that barely scratches the surface of the world’s dependency on fuels with high carbon emissions. Meaningful climate action cannot occur without a serious attempt at curbing these emissions and making clean energy affordable and easy to access for everybody.

Social responsibility is an integral part of the ethos underlying Islamic finance. An important legal maxim in Islam states “the aversion of harm takes precedence over the acquisition of benefits.” In practice, this must mean that the preservation of life and the sanctity of the environment supersede capital interests. This frame of thought naturally encourages industrial innovations that circumvent these externalities. Additionally, wastefulness is prohibited in Islam. Using more of any material or good than what is needed is generally frowned upon. Such an attitude would encourage the re-use of goods and recycling of materials as much as possible instead of accumulating waste. This in turn fosters a culture of responsible consumption.

Institutional measures for responsible consumption and eco-friendly energy are already being taken by a number of Muslim majority countries. Saudi Arabia and other Gulf countries, for instance, are actively working to reduce their dependence on hydrocarbons. Clean energy projects are also on the rise in other parts of the Muslim world—the top five beneficiary countries of IDB’s renewable energy sector financing were Morocco, Pakistan, Egypt, Tunisia, and Syria. Furthermore, financial institutions are utilising Islamic financial models to finance alternative energy initiatives, an example being “Green Sukuk”—Sukuk financing clean energy needs and supporting national development strategies.

Conclusion: what makes or breaks the SDGs?

The final and arguably most crucial of the UN’s 17 SDGs is a partnership: collaboration, cooperation, and community building at an international scale. None of these goals are achievable without mutual cooperation between all the world’s nations.  Developmental and economic inequity between nations are just a few of the major hurdles in reaching this all-important SDG. Countries with national statistics plans (necessary for evidence-based policymaking) have declined from 56 to 54. The weighted average of tariffs, a measure of cooperation between nations, has been falling over time but varies widely (agricultural tariffs on imports into Asia range between 20% and 27%). In sectors such as IT, emerging nations are lagging far behind the developed world, and their development is simultaneously crippled by the numerous other issues the SDGs aim to tackle. The solution to this challenge is ironically the goal itself; partnership.

Reaching this vision for 2030 requires a collaborative effort between governments, civil society, the private sector, and other vital institutions. In Islam, discord and disputation among groups are deemed the primary causes of failure. The tradition champions the concept of mutual consultation which has been expressed in models of social order such as the shura (council). This ideal is something we believe to be timeless and fundamental to human progress. While we’ve illustrated how principles of Islamic finance can and have effected change in certain areas, this approach to finance is a holistic one. It requires introspection into our current condition and a critical look at how modern enterprises are impacting society. It’s not simply a case of tweaking the system but rethinking our approach to finance from the ground up, and placing ethics at the heart of all our endeavours.