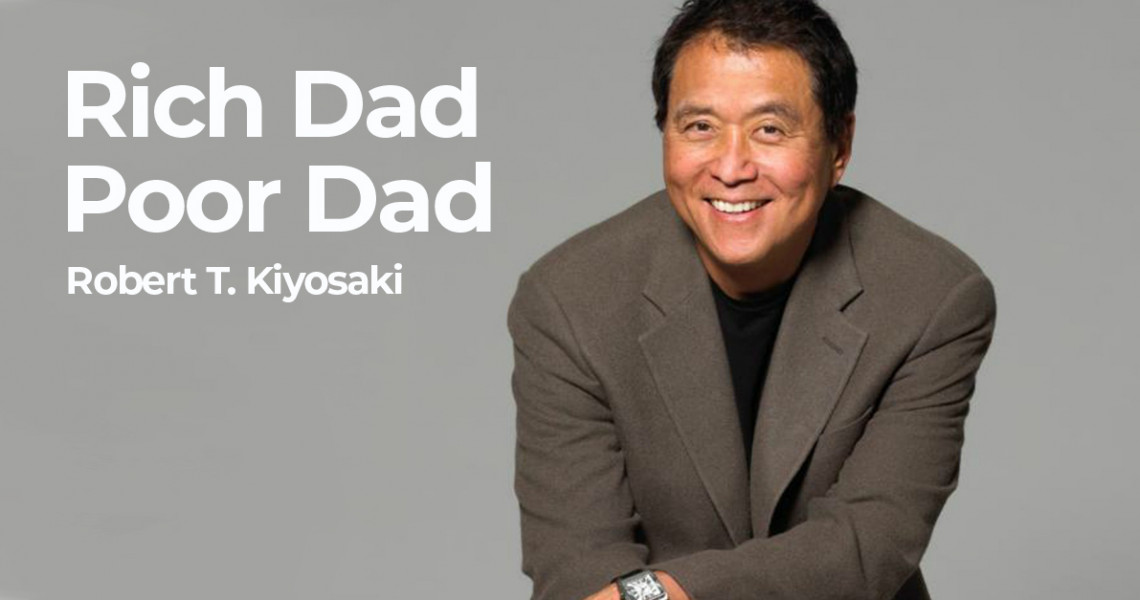 This article was first published by our content partner Islamicfinanceguru

In a previous article, I mentioned that I would write further about the idea of wealth creation. Understanding some basic principles can literally transform your thinking and set you on your path to creating wealth and, ultimately, financial freedom. I believe that once you remove finance as a daily worry and no longer have to commit so much of your time to employment, that frees up your capacities for other effective work for society at large.

There are some really good books out there, but I wanted to focus on just one today which was really useful for me personally and I know others have also taken great benefit from it. The book is called ‘Rich Dad Poor Dad’ by Robert Kiyosaki, and centres around the author’s experiences of his own father (‘Poor Dad’), a well-educated university professor, versus the experiences of learning from his best friend’s father (‘Rich Dad’), who lacked in academic qualifications but had business nous.

In short, his father (‘Poor Dad’) might have been a well-paid, stable professional, but never truly attained wealth; Rich Dad, however, was wealthy.

I want you to read the book for yourself, but to whet your appetite, I will run through some principles that are mentioned in the book.

1. Making money work for you

There is nothing novel about what Kiyosaki says here; everybody knows that sitting at home and getting passive income is a far better situation than having to work for your money. But what Kiyosaki stresses is the importance of that journey and how you should be very strategic about that journey from employee, to being able to retire because your passive income is greater than your expenses.

He talks about how whether rich or poor, people need to control two emotions: fear and desire. Money is essentially an illusion and fear is what drives us to get out bed and go to work every morning and desire is why we are tempted by pay rises as we desire increasingly ‘expensive toys’ as we go on through life: from sweets to clothes, to cars, to houses, etc.

To combat this, Rich Dad persuades the young boys (as they are at this point in the book) to stop thinking about wages and start thinking about how they can generate money for themselves. He argues that most people miss opportunities because they seek money and security, but once you get rid of this, you view the world in a different way: full of opportunities.

Again, nothing novel here. Managing money is obviously important. But what many people fail to realize, according to Kiyosaki, is that financially successful people do one thing better: save money. They tend not to spend on luxuries until they can actually afford it. Most middle-class folk and we see this all the time around us, spend far too much money creating the illusion of wealth, whereas actually, they’re just getting by month to month without actually creating wealth because they want the Mercedes on the drive or a Rolex on the wrist.

Kiyosaki breaks it down very simply: assets are things that bring in money, liabilities are things that take money out of your pocket. He stresses how often misunderstood this is by using the example of a house. The house you live in is a liability, not an asset, even though many people define their house as ‘an investment’.

The only things that can be classed as assets are things that actually bring in money: additional rented properties, for instance, are assets. The key, Kiyosaki explains, is to limit your liabilities and grow your assets. He argues that average, middle-class people focus on their wage slips and what they bring in, whilst the rich focus on acquiring and building their portfolio of assets knowing that building passive income is the key to attaining financial freedom.

One of the major differences between Rich Dad and Poor Dad was that Poor Dad would get his monthly salary, pay off the bills, and use the remainder. By contrast, rich Dad would pay himself first, even if that means his bills exceeded the remaining amount.

The idea behind this, according to Rich Dad, is that when you do not have enough money to cover an essential thing like paying bills, this pressure drives your creative genius to inspire ways that will ensure you cover the bill money that month. However, if you pay the essentials first with ease, your genius will not be inspired as you will simply pay yourself whatever the remainder is rather than being forced to come up with more.

Now I’m not saying you should be irresponsible and start telling British Gas or whoever that you’re not paying them this month because you paid yourself first and Kiyosaki said that was a great idea, but the point behind giving yourself that pressure is a sound one to inspire in you some commercial creativity that might just lead to a new business idea or some other income-generating proposition. This is why you often find that entrepreneurs come from financially unstable backgrounds – the pressure inspired them.

Kiyosaki puts forth the argument that it isn’t smart people who get ahead in the world, it’s bold people.

He uses an example from his own life to paint this picture. He talks about how standard thinking is to save money, put something away every month in a bank account and come back to it in 40 years. Kiyosaki, however, argues that this limits people’s mindsets and ability to take advantage of opportunities.

In the early 90s, the market in Phoenix, Arizona was terrible. But instead of buying property at the estate agents (even though property was massively marked down), he started doing deals at bankruptcy lawyer’s offices or courthouse steps. In this way, he was able to do deals for $75,000 properties at $20,000 or less. He would then sell these on for $60,000. Kiyosaki and his wife managed to do six of these deals, each taking around 5 hours’ work. They created over $190,000 in assets from these deals – how long would they have had to save to achieve that?

This is an especially useful chapter in which Kiyosaki outlines that the value of being an employee isn’t in the money, it’s in leveraging the resources of a particular company in order to better yourself. He advocates learning a little about a lot.

For instance, he took a job with Xerox simply because he knew that he was a shy person and Xerox was renowned for having the best sales training programme out there. He ended up becoming one of the top salespeople in the company and, having gained what he wanted out of the job, left shortly after.

Kiyosaki also took jobs as a construction worker, a busboy, reservations, marketing, and sat in on meetings (with Rich Dad) with lawyers, bankers, accountants, etc. This was all part of learning a little about a lot so that he could run his companies in the most effective way.

Kiyosaki finishes off the book imploring readers to overcome obstacles like bad habits and arrogance, and how you can get started.

The book is an extremely useful way of starting to think about the world and commercial opportunities differently in order to start creating wealth and I highly recommend the read! You can pick it up fairly cheap new or used at Amazon