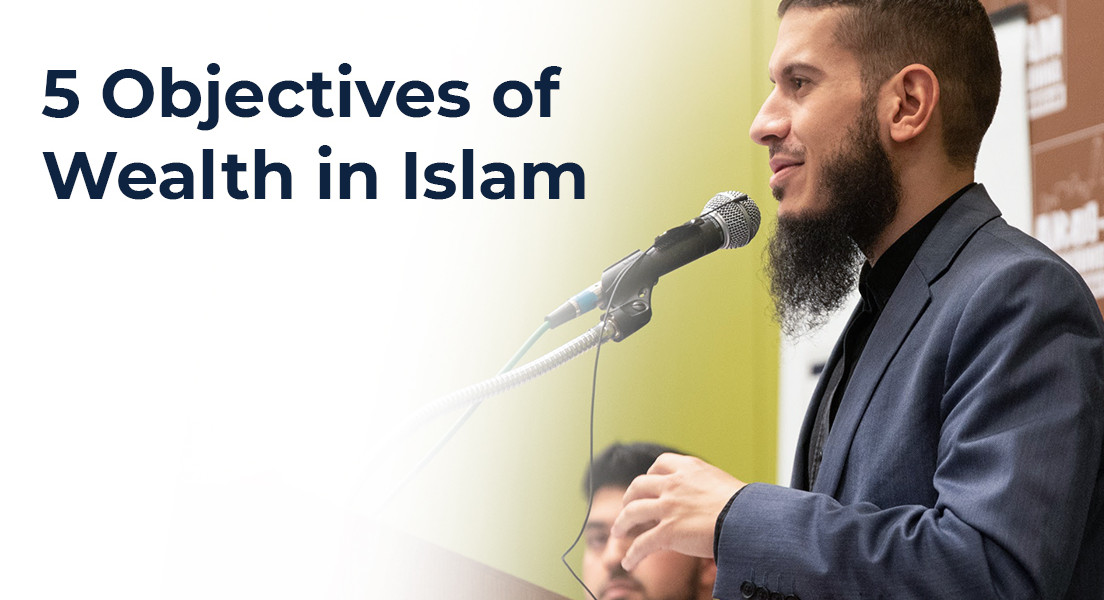 The emergence and spread of Islamic Finance in the modern world raise important ethical and socio-religious questions regarding māl (wealth/property) in society. Islam has prioritized the preservation, conservation, and circulation of wealth as one of the five maqāsid (general objectives) of Shari’ah1. These objectives include the preservation of religion, (ad-deen), the soul (an-nafs), the mind/intellect (al-‘aql), progeny (an-nasl), and wealth/property (al-māl).2 The fulfillment of these objectives is for the sake of a just, balanced society, on the micro and macro levels, thus aiding humanity in realizing well-being.  As the field of finance deals with the allocation and appropriation of wealth (maal), the objectives of wealth are analyzed by observing the essence, utility, and role of wealth in relation to human wellbeing – on the micro and macro levels – by facilitating wellbeing (maslaha)and preventing harm (mafsadah).3 Among the proposed objectives of wealth in Islam are the following:

Interestingly, the discussions on the hoarding of wealth (kanz) can be traced back to the first generation of companions. Among the companions were those who held the view that any wealth after paying the zakāh is not to be considered a form of hoarding, even if the owner of that wealth did not invest or spend it. The companions who held this opinion understood the verse – “and those who hoard (yaknizoon) gold”6 – to refer to the people of the book, and that for most scholars of exegesis (tafsīr), anything remaining after the paid zakāh is not considered a type of hoarding.7

A second opinion, attributed to Ali b. Abi Talib and Abu Dhar Al-Ghifari from the generation of the companions, suggests that the habit of hoarding is problematic, and that action should be taken to promote the investment and circulation of wealth. For example, Ali (RA) did not consider the saving of 4,000 dirhams or more to be considered permissible – even if the owner of that wealth paid the zakāh – because it prevents the circulation of wealth.8 From one facet, the hoarding of wealth after a particular threshold could be perceived as devouring the wealth of people unjustly,9 and this is because the lack of wealth circulation – and its objectives – impacts the prosperity of all people in society. Abu Dhar, on the other hand, held a more conservative view, as he believed that all of one’s surplus wealth after the fulfillment of basic needs (including the due zakāh) to be considered hoarding. Imam Al-Ghazali (d. 1111) suggested something similar when he stated: “The one who hoards [dirhams and dinars] has wronged their purpose and rejected the divine wisdom behind their creation, which is that these [currencies] are to be circulated amongst people.10 “The hoarding of currencies in the modern world of fiat money, however, has become slightly less problematic as the dirham and dinar were based on precious metals – metals which had alternative uses in society. While these two classical viewpoints suggest that savings are conflated with hoarding, the modern economy is considerably different and requires a contemporary analysis.

The circulation of wealth in Islamic economics is “the exchange of products from one person to another,”11 an objective which cannot be attained if hoarding is limitlessly permitted. Thus, the contemporary understanding of such circulation is by means of transactions or investments – the forms that bring about benefit individually or collectively. While consumer spending is necessary for an active, vibrant economy, materialism and debt culture are contrary to Islamic principles. Thus, the concept of savings in the modern sense is not problematic in light of the two classical opinions on hoarding, as the very nature of saving today could potentially increase the circulation of wealth by investing or supplying capital to the economy. Kanz, or amassing and hoarding wealth, thus, does not imply that there is a prohibition on modern savings for one’s family or future needs, so long as it does not violate any of the principles of Shari’ah. Rather than placing a certain threshold on savings, beyond which any māl should be utilized for investments or the circulation of wealth (e.g., an interest-free loan to someone in need), the public should instead be incentivized through various multi-faceted platforms and policies to invest ethically in order to benefit the greater collective.